Vee-Jay and it's subsidiaries were owned by Vivian Carter Bracken,  James Bracken, her husband, and Calvin Carter. Vee-Jay  was the first large independent record company to be owned by blacks and was the most successful black owned record company before Motown.  Vee Jay contributed a tremendous legacy of blues, rhythm and blues, doowop,  jazz, soul, pop and rock n' roll

James Bracken was born in Oklahoma on May 23, 1909; grew up in Kansas City, Kansas; and attended Western University In Quindaro, Kansas. He was living in Chicago when he met Vivian Carter in 1944. Carter was born in Tunica, Mississippi, in 1920 and moved to Gary, Indiana, as a little girl. She graduated from Roosevelt High in 1939. In 1948, in Chicago, she won a talent contest for new deejays conducted by Al Benson. She worked three months at WGES and then moved to WJOB in her hometown  of Gary. Carter and Bracken became business partners in 1950 when they founded Vivian's Record Shop in Gary. After three years of saving their money, in mid-1953 they decided to start their own record company. Meanwhile Vivian continued deejaying in Gary, joining WGRY, in 1952 and moving to WWCA in 1954, which was undoubtedly a significant factor in attracting talent to their label. 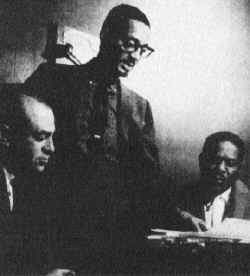 her brother, Calvin Cook was an established musician. Before starting Vee-Jay they had served as consultants for Chess brothers as to the commercial viability of Chess Records recordings.

Vee Jay was also a major player in the gospel music field, with luminaries like the Staple Singers, the Original Five Blind Boys, Harmonizing Four, the Caravans, Gospel Harmonettes and the Swan Silvertones in its stable of artists. It has even been suggested that one of Vivian Carter's main reasons for starting Vee Jay was to record gospel performers.

Vee Jay was the first to introduce the Beatles to the US. They dominated the pop charts with the first hits from the Four Seasons. Everyone from blues legends Jimmy Reed and John Lee Hooker, soul singers Jerry Butler, Curtis Mayfield and Betty Everett and the Dells recorded for Vee Jay. Interestingly enough, young unknowns David Gates (of Bread), Hoyt Axton and Jimi Hendrix briefly appeared on the label.

"I know a record company (probably referring to Vee-Jay) who done a minimum of fifteen million dollars worth of  business in two years and they are bankrupt ...... Syd Nathan of King Records.

Poor financial management led to bankruptcy in 1966 despite having the Dells, Four Seasons. and Jerry Butler and the Impressions.