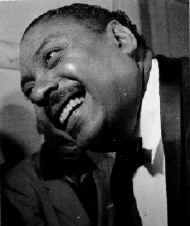 The premier blues shouter of the postwar era, Big Joe Turner's roar could rattle the very foundation of any gin joint he sang within -- and that's without a microphone. Turner was a resilient figure in the history of blues -- he effortlessly spanned boogie-woogie, jump blues, even the first wave of rock & roll, enjoying great success in each genre.

Turner, whose powerful physique certainly matched his vocal might, was a product of the swinging, wide-open Kansas City scene. Even in his teens, the big-boned Turner looked entirely mature enough to gain entry to various K.C. nighteries. He ended up simultaneously tending bar and singing the blues before hooking up with boogie piano master Pete Johnson during the early '30s. Theirs was a partnership that would endure for 13 years. The pair initially traveled to New York at John Hammond's behest in 1936.On December 23, 1938, they appeared on the fabled Spirituals to Swing concert at Carnegie Hall on a bill with Big Bill Broonzy, Sonny Terry, the Golden Gate Quartet, and Count Basie. Big Joe and Johnson performed "Low Down Dog" and "It's All Right, Baby" on the historic show, kicking off a boogie-woogie craze that landed them a long-running slot at the Cafe Society (along with piano giants Meade Lux Lewis and Albert Ammons).

As 1938 came to a close, Turner and Johnson waxed the thundering "Roll 'Em Pete" for Vocalion. It was a thrilling up-tempo number anchored by Johnson's crashing 88s, and Turner would re-record it many times over the decades. Turner and Johnson waxed their seminal blues "Cherry Red" the next year for Vocalion with trumpeter Hot Lips Page and a full combo in support. In 1940, the massive shouter moved over to Decca and cut "Piney Brown Blues" with Johnson rippling the ivories. But not all of Turner's Decca sides teamed him with Johnson; Willie "The Lion" Smith accompanied him on the mournful"Careless Love," while Freddie Slack's Trio provided backing for "Rocks in My Bed" in 1941.  Turner ventured out to the West Coast during the war years, building quite a following while ensconced on the L.A. circuit. In 1945, he signed on with National Records and cut some fine small combo platters under Herb Abramson's supervision. Turner remained with National through 1947, belting an exuberant "My Gal's a Jockey" that became his first national R&B smash. Contracts didn't stop him from waxing an incredibly risqué two-part "Around the Clock" for the aptly named Stag imprint (as Big Vernon!) in 1947. There were also solid sessions for Aladdin that year that included a wild vocal duel with one of Turner's principal rivals, Wynonie Harris, on the ribald two-part "Battle of the Blues."

Few West Coast indie labels of the late '40s didn't boast at least one or two Turner titles in their catalogs. The shouter bounced from RPM to Down Beat/Swing Time to MGM (all those dates were anchored by Johnson's piano) to Texas-based Freedom (which moved some of their masters to Specialty) to Imperial in 1950 (his New Orleans backing crew there included a young Fats Domino on piano). But apart from the 1950 Freedom 78, "Still in the Dark," none of Big Joe's records were selling particularly well. When Atlantic Records bosses Abramson and Ahmet Ertegun fortuitously dropped by the Apollo Theater to check out Count Basie's band one day, they discovered that Turner had temporarily replaced Jimmy Rushing as the Basie band's front man, and he was having a tough go of it. Atlantic picked up his spirits by picking up his recording contract, and Big Joe Turner's heyday was about to commence.

At Turner's first Atlantic date in April of 1951, he imparted a gorgeously world-weary reading to the moving blues ballad "Chains of Love" (co-penned by Ertegun and pianist Harry Van Walls) that restored him to the uppermost reaches of the R&B charts. From there, the hits came in droves: "Chill Is On,""Sweet Sixteen" (yeah, the same downbeat blues B.B. King's usually associated with; Turner did it first), and "Don't You Cry" were all done in New York, and all hit big.

Big Joe Turner had no problem whatsoever adapting his prodigious pipes to whatever regional setting he was in. In 1953, he cut his first R&B chart-topper, the storming rocker "Honey Hush" (later covered by Johnny Burnette and Jerry Lee Lewis), in New Orleans, with trombonist Pluma Davis and tenor saxman Lee Allen in rip-roaring support. Before the year was through, he stopped off in Chicago to record with slide guitarist Elmore James's considerably rougher-edged combo and hit again with the salacious"T.V. Mama."

Prolific Atlantic house writer Jesse Stone was the source of Turner's biggest smash of all, "Shake, Rattle and Roll," which proved his second chart-topper in 1954. With the Atlantic brain trust reportedly chiming in on the chorus behind Turner's rumbling lead, the song sported enough pop possibilities to merit a considerably cleaned-up cover by Bill Haley & the Comets (and a subsequent version by Elvis Presley that came a lot closer to the original leering intent).

Suddenly, at the age of 43, Big Joe Turner was a rock star. His jumping follow-ups -- "Well All Right," "Flip Flop and Fly," "Hide and Seek," "Morning, Noon and Night," "The Chicken and the Hawk" -- all mined the same goodtime groove as "Shake, Rattle and Roll," with crisp backing from New York's top session aces and typically superb production by Ertegun and Jerry Wexler.

Turner turned up on a couple episodes of the groundbreaking TV program Showtime at the Apollo during the mid-'50s, commanding center stage with a joyous rendition of "Shake, Rattle and Roll" in front of saxman Paul "Hucklebuck" Williams's band. Nor was the silver screen immune to his considerable charms: Turner mimed a couple of numbers in the 1957 film Shake Rattle & Rock (Fats Domino and Mike "Mannix" Connors also starred in the flick).

Updating the pre-war number "Corrine Corrina" was an inspired notion that provided Turner with another massive seller in 1956. But after the two-sided hit "Rock a While"/"Lipstick Powder and Paint" later that year, his Atlantic output swiftly faded from commercial acceptance. Atlantic's recording strategy wisely involved recording Turner in a jazzier setting for the adult-oriented album market; to that end, a Kansas City-styled set (with his former partner Johnson at the piano stool) was laid down in 1956 and remains a linchpin of his legacy.

Turner stayed on at Atlantic into 1959, but nobody bought his violin-enriched remake of "Chains of Love" (on the other hand, a revival of "Honey Hush" with King Curtis blowing a scorching sax break from the same session was a gem in its own right). The '60s didn't produce too much of lasting substance for the shouter -- he actually cut an album with longtime admirer Haley and his latest batch of Comets in Mexico City in 1966!

But by the tail end of the decade, Big Joe Turner's essential contributions to blues history were beginning to receive proper recognition; he cut LPs for Blues Way and Blues Time. During the '70s and '80s, Turner recorded prolifically for Norman Granz's jazz-oriented Pablo label. These were super-relaxed impromptu sessions that often paired the allegedly illiterate shouter with various jazz luminaries in what amounted to loosely-run jam sessions. Turner contentedly roared the familiar lyrics of one or another of his hits, then sat back while somebody took a lengthy solo. Other notable album projects included a 1983 collaboration with Roomful of Blues, Blues Train, for Muse. Although health problems and the size of his humongous frame forced him to sit down during his latter-day performances, Turner continued to tour until shortly before his death in 1985. They called him the Boss of the Blues, and the appellation was truly a fitting one: when Big Joe Turner shouted a lyric, you were definitely at his beck and call. ~ Bill Dahl, All-Music Guide

Inducted into the Rock and Roll Hall of Fame in 1987 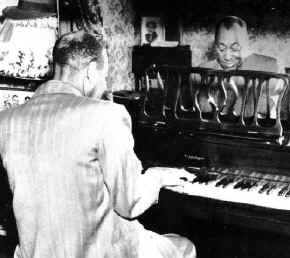 One of the pioneers of boogie-woogie piano, Jimmy Yancey was generally more subtle than the more famous Albert Ammons, Pete Johnson and Meade Lux Lewis, falling as much into the blues genre as in jazz. Yancey, who could romp as well as anyone, made many of his most memorable recordings at slower tempos. No matter what key he played in, Yancey ended every song in E flat, leading to some hilarious conclusions to some recordings. He worked in vaudeville as a singer and tap dancer starting at age six and in 1915 settled in Chicago as a pianist. But Yancey spent his last 26 years (from 1925 on) earning his living as a groundskeeper at Comiskey Park for the Chicago White Sox. He played part-time in local clubs and began recording in 1939, on a few occasions backing his wife, singer Mama Yancey. Jimmy Yancey never achieved the fame of his contemporaries but he remained a major influence on all practitioners in the genre. -- Scott Yanow, All-Music Guide