Despite increasing popular success, Cash's life seem to deteriorate. In October 1965 he was arrested at the El Paso international airport in possession of stimulants and tranquilizers. After being found near death in a small Georgia town in 1967, Cash decided to reform. With June Carter providing moral support he cleaned up his act. The pair had a smash hit with "Jackson" in 1967 and married in March 1968. In early 1970 they had a smash/moderate pop hit with "If I Were a Carpenter." 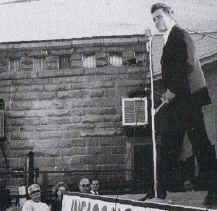 Luther Perkins died accidentally in 1968 and was replaced by Bob Wooten. The 1968 album Johnny Cash at Folsom Prison revitalized his career and made him an international star. The album yielded a top country/moderate pop hit "Folsom Prison Blues." Cash had another top country/ smash pop hit with the novelty tune "A Boy Named Sue" from Johnny Cash at San Quentin, another best seller.In early 1969 Cash had another country and pop hit with Carl Perkin's "Daddy Sang Bass." 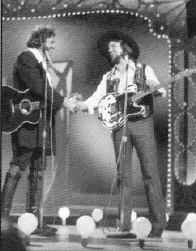 Cash demonstrated his social consciousness in the early '70s with the hits "What Is Truth" and "The Man in Black." He also narrated and co-produced the soundtrack to the Christian epic Gospel Road and assisted in the production of The Trail of Tears, a dramatization of the tragedy of the Cherokee Indians, broadcast on public television.

Cash scored a top country/ major pop hit (his last) with the novelty song "One Piece at a Time" in 1976 and a smash country hit with "There Ain't No Good Chain Gangs" recorded with Waylon Jennings. In 1980 Cash returned to his early style of music, recording Rockabilly Blues with Nick Lowe and Dave Edmunds of Rockpile. His last major country hit came in 1981, with "The Baron."

In 1985 Cash joined Waylon Jennings, Willie Nelson, and Kris Kristofferson to tour and record as the Highwaymen. They had major hits with "The Highwaymen" and "Desperadoes Waiting for a Train."Cash later had a moderate hit with Waylon Jennings with "Even Cowgirls Get the Blues" and and a major country hit with Hank Williams Jr. "That Old Wheel."  In 1986 Cash reunited with old Sun alumni Carl Perkins, Jerry Lee Lewis, and Roy Orbison for Class of '55, contributing "I Will Rock and Roll With You." 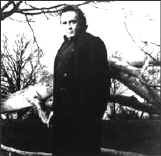 In 1986 Cash was dropped by Columbia Records after twenty-eight years. he then signed with Mercury Records, switching to American Records in 1993. In 1990 Cash rejoined Jennings, Nelson and Kristofferson as the Highwaymen for another album and round of touring. In 1993 he sang "The Wanderer" with U2, included on their Zooropa album and later recorded American Recordings. In 1995 Cash once again joined the Highwaymen, to tour and record for Liberty Records The Road Goes On Forever. Cash recorded a 1996 album with Tom Petty and the Heartbreakers, which featured several Cash originals. Over the years Johnny cash has appeared in dramatic roles in films (1970's A gunfight with Kirk Douglas) and television (1986's Stagecoach with the other Highwaymen,  Davey Crockett), and even wrote a novel (1986's Man in White). Despite health problems (Cash had a double by-pass heart operation in 1988) Johnny Cash has continued to tour with his wife, June and son John Carter Cash.