Bill Haley and His Comets

Billy Haley and his Comets fused elements of country music, Western Swing, and black R&B to produce some of rock and roll's earliest hits. His "Crazy, Man Crazy" from 1953 was the  first rock and roll record to make the pop charts.

Bill Haley was born in Highland Park, Michigan on July 6, 1925 to William and Maude Haley. The couple's second child, Haley had a sister Margaret who was born two years earlier.

When Haley was four while having an operation to repair an inner ear ailment the doctor accidental cut an optic nerve. The result was that Haley would never ever see out of his left eye.

The Haleys had moved to Detroit from Firebrick, Kentucky, where William Sr. found work in a nearby service station as a mechanic while his wife gave piano lessons in their home for twenty-five cents an hour. Maude Haley, a woman of strong religious convictions, had come to America with her family from Ulverston in Lancastshire, England before the First World War. Later the family moved to Boothwyn, near the town of Chester, Pennsylvania.

William Haley Sr. was a quiet man from the hills of Eastern Kentucky who had to quit school early to find work. His father had died young and his mother desperately needed his income to raise the younger children. William Sr. struggled with this burden until the last of his brothers and sisters were educated and on their own. Only then, after he was thirty years old, did he marry.

Haley's father played the banjo and mandolin. Though he couldn't read music he had an ear for country music and was able to pick out any tune he wanted by ear.

At thirteen Haley received his first guitar. His father taught him to play the basic chords and notes by ear. It was at this time he began his dream of  becoming a singing cowboy like the ones he idolized every Saturday afternoon at the movie houses in nearby Marcus Hook or Chester.

In June of 1940, just before his fifteenth birthday, Haley left school after finishing the eighth grade and went to work bottling water at Bethel Springs. This company sold pure spring water and fruit flavored soft drinks in a three state area. Here he worked for 35 cents an hour, filling large five gallon glass bottles with spring water.  Only the absolute best of the best were making a living from making music.

At 18 he made his first record "Candy Kisses" and for the next four years was a guitarist and singer with country and western bands.

After time on the road with the Down Homers Haley returned to his parents' home in Booth's Corner in September of 1946. He was ill, disillusioned and so broke he had to walk from the train station in Marcus Hook four miles to Booth's Corner. His only request to his mother was not to tell anyone he was home, not even his fiancée Dorothy. Bill fell into bed and slept thirty hours. Over the next two weeks Mrs. Haley slowly nursed her itinerant son back to health. 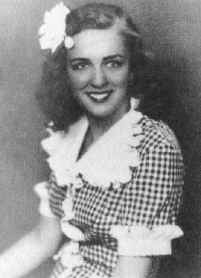 By the age of 21, Haley felt he wasn't going to make it big as a cowboy singer and ill left the 'Downhomers', and returned to Chester to host a local radio program.. At this time he also married his childhood sweetheart Dorothy Crowe a beautiful part American Indian girl. 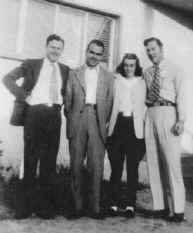 Haley was hired in 1947 as musical director for radio station WPWA. Working twelve to sixteen hours a day, six days a week he interviewed dozens of local people, always looking for good ideas and new talent. Each Sunday he would go to Radio Park and invite celebrities to do a special half hour program where he would interview them and ask them to sing or play their latest tunes.

It was during this time that he put together a band The Four Aces of Swing that performed on the his show. In 1948 on the Cowboy label Haley recorded with The Four Aces of Western Swing. The Four Aces disbanded in mid '49 and Haley formed a new band, the Downhomers with which he recorded country music. Later he left the group to return Chester to host a local radio program.

In the summer of 1950, through the efforts of Jimmy Myers, Bill Haley and his Saddlemen cut their first records. They were on Ed Wilson's Keystone label, a small Philadelphia independent publisher. The songs were standard western swing tunes: "Deal Me A Hand" /" Ten Gallon Stetson" and "Susan Van Dusan" /" I'm Not To Blame."  They were the first recordings of the band that would become the nucleus of the world famous Comets.

With their new, exciting sound  the name "Saddlemen" no longer seemed appropriate. According to Marshall Lytle, it was Bob Johnson, Program Director at WPWA who first suggested the name Haley's Comets. "Ya 'know, with a name like Haley, you guys should call your group the Comets!"

Just before the Thanksgiving holidays in 1952, Haley's band changed their name and their image for the last time. Off came the cowboy boots and the white Stetsons. With some regrets and more than a little apprehension, the four young musicians, turned their backs on their beloved country/ western music and bravely faced an unknown future as "Bill Haley and His Comets". 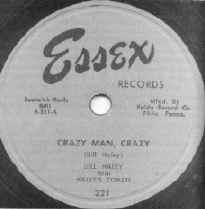 One example of that change was "Rock the Joint" which sold 75,000 copies. In 1953 he wrote "Crazy Man Crazy" which became the first rock and roll record to make the Billboard pop chart reaching the Top 20.

On April 1st, 1954,  Jimmy Myers, Milt  Gabler and Bill Haley met in Decca's New York offices. The three men discussed a contract for four records a year, a standard royalty of 5% of sales, $5,000.00 in advance royalties and the understanding that Decca would mail out each release to two thousand disc-jockeys with full support publicity. Plus full page ads in Billboard and Cash Box magazines! With the deal set and signed, the three men shook hands and agreed on a recording date four days after the Essex contract was due to expire.

His next record a cover of Joe Turner's "Shake, Rattle and Roll' was a top ten hit.  It was the first rock & roll record to sell a million copies 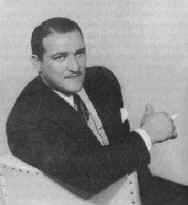 On July 17, 1954, three months after the Shake, Rattle and Roll session the Comets lost their studio guitarist Danny Cedrone who laid on Rock Around the Clock the first recognizable guitar solo of rock and roll. He would be replaced by Francis Breecher who had been introducer to the Comets by Billy Williamson a tear earlier.

The next really big hit came with "See You Later Alligator" which sold a million copies within a month. 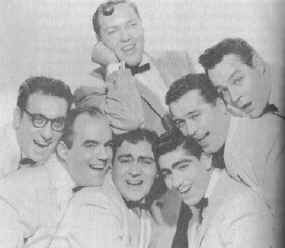 In September, 1955 Dick Richards, Marshall Lytle and Joey D'Ambrosio went to the Comet's manager Jim Ferguson and asked for a raise. Turned down they gave two weeks notice. They then went  and signed with Capital Records and recorded as the Jodimars.

Lytle was replaced by Al Rex Haley's original basist from the Saddlemen, D'Ambrosio by Rudy Pompilli and Richards by Ralph Jones.

In 1957, Haley began touring touring Britain as his popularity began fading at home. The first American Rock and Roll star to come to Britain, he was met with large and enthusiastic crowds. The British soon found out what American teenagers already

knew. Haley with his spit curl was old (30), overweight and rather mechanical when compared to Little Richard, Jerry Lee Lewis, Gene Vincent and Elvis who were younger and who's music was more exciting. Bill Haley & His Comets were there first, but now they were part of the establishment.

After 1957 Haley had a few minor hits, but spent the remainder of his life touring and playing Rock and Roll Revival shows. In the early morning hours of February 9th, 1981, Bill called two of his sons, Scott and Jack, and had his last known conversations. He died, in his sleep of an apparent heart attack, about 6:30 that morning at his home in Harlingen, Texas.