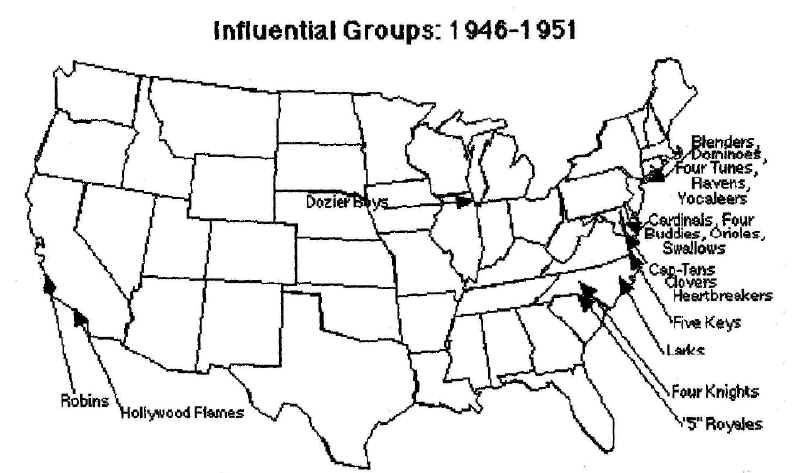 In the late forties Rhythm and Blues was quite different in different areas of the country. Urban North rhythm and blues that had been influenced by gospel, bee-bop, jazz and black popular music was more sophisticated The instrumentation, melodies and arrangements were more complicated having been influenced by the vocal harmonies of big band and jazz sounds. The singers were more often crooners then shouters.The North rhythm and blues would evolve to a street corner sound called "Doo Wop."

The Ravens and The Orioles, two important inspirational groups, arrived on the scene in the late forties.The Ravens sang with a hint of color songs rooted in jazz and rhythm and blues. 1950's "Count Every Star" featured  full range vocal backing highlighted by wordless vocal bass lines and high falsetto that constitute the virtual definition of doo wop.

The Orioles sang mainly ballads and sounded black. In 1953 the Orioles "Crying In the Chapel"  had an unmistakably back sound, with emotional singing, wordless falsetto and  vocal backing that reflected a trend toward  a gospel style. "Crying In The Chapel" was an important song because along with being a #1 R&B hit it also reached #11 on the Pop chart. In "crossing" over it showed the increasing acceptance of a black style by a white audience.

Billy Ward and His Dominoes was another important group of the early fifties and is remembered for two things. First was 1951's

"Sixty Minute Man" which made at to #23 on the pop charts due to sales to teenagers and secondly Ward's selection of Clyde McPhatter and his successor Jackie Wilson as lead singers.

The lyrics of "Sixty Minute Man" were considered to be shocking and vulgar in 1951.

If you don't believe I'm all I say
Come up and take my hand
When I let you go you'll cry,
"Oh yes, he's a sixty minute man!"

"Sixty Minute Man" reached #1  R&B and #11 on the pop charts. It was the most successful R&B record to reach that high on the pop charts and showed that black styles were becoming more accepted.