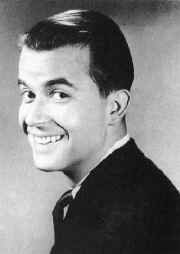 As host to the first network television series devoted to rock and roll and the longest running musical show in television history, American Bandstand, Dick Clark made rock music palatable to the mainstream American public and helped promote the careers of many rock and roll artists of the 50s, both the talents and no talents.

Richard Wagstaff Clark was born November 30, 1929 in Mount Vernon, New York. He was an average student until he reached the tenth grade and discovered radio. At that time he decided radio would be his career. 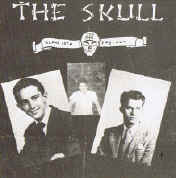 The summer after high school Clark was given a job at WRUN-AM radio in Rome, NY. The station was owned by his uncle and run by his father. Clark was only an office boy, but the station manager asked him to fill in for a vacationing weatherman on WRUN's new FM station. By summer's end Clark had advanced to station breaks. 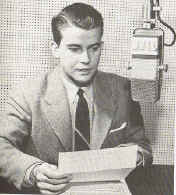 Clark attended Syracuse University where he majored in advertising with a minor in radio. In his senior year he had a got a job with WOLF a country station in Syracuse He came back to WRUN for a short time where he used the name Richard Clay that led to his first television job, as a newscaster at WKTV in Utica, NY. Using the name Dick Clark in 1952 he went to work for WFIL radio and television in Philadelphia, PA.That summer WFIL decided to follow the new trend of having announcers play records over the air. Shortly there after, they tried the same format on television. Bob Horn, a WRIL radio deejay, aired an early form of music video on a show called "Bandstand". Within a month teenagers were invited to come and dance while Horn played records.. The show became very successful with the high school students.

At this time Clark was hosting a similar program on WFIL radio and in 1955 when Horn went on vacation Clark filled in for him. Clark took over the show on July 9, 1956 after Horn's drunken driving arrest. 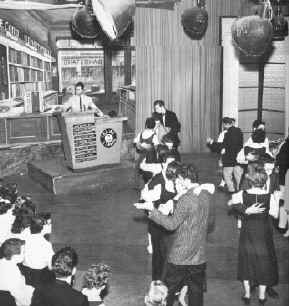 Clark knew almost none of the songs, but had the insight to work with the kids. He'd ask about favorite songs, clothing trends and watched for dance fads. At 26 he was young enough to be a friend and projected a none threatening image. After several years of local success Bandstand went national. The first national broadcast of American Bandstand was on August 5, 1957 on ABC-TV from 3:00-4:30 P.M.. This was the perfect time to reach teens coming home from school. Girls that appeared on the show weren't allowed to wear slacks or tight sweaters and the boys had to wear a coat and tie. Smoking and chewing gum was not allowed. The show was built around a regular group of Philadelphia high school students who developed their own national following

American Bandstand provided the first national exposure of Chuck Berry, Jerry Lee Lewis, Buddy Holly, and Chubby Checker among others. The success of the show also encouraged the proliferation of local labels such as Cameo-Parkway, Swan, Jamie, and Chancellor. Clark was financially involved in Swan and Jamie, and acts for these labels, and acts for these labels seemed to prosper more than most as a result of exposure on American Bandstand. 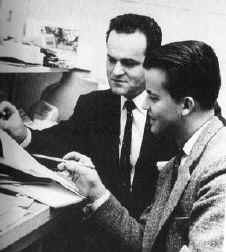 On Feb 15, 1958 The Dick Clark Show received a spot in ABC-TV's Saturday night line up. It featured established as well as new acts and was broadcast live from New York. Twenty million fans were watching American Bandstand and by the end of the year was being carried on sixty-four stations.

"The man was big. He was the biggest thing at the time in America at that time. He was bigger than the President!"
Hank Ballard, The Midnighters

With the large number of viewers having a new song played on the show virtually guaranteed that thousands of the record would be sold in the next week. A record played daily had a good chance of going top ten. Agents attempted to get their acts on the show. Soon the power of the show became a concern within the music  business.

Clark-Mammarella Outside Business Interests
Before Divestiture, October 1959, source
Chart One 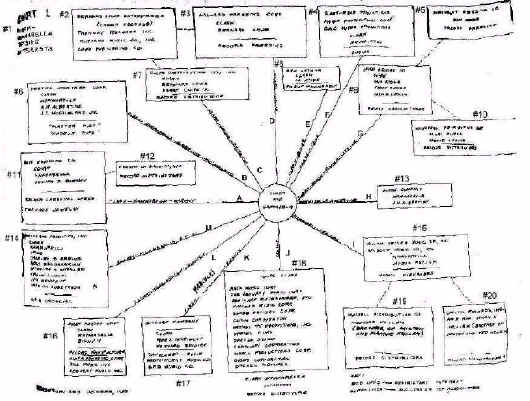 Many people in the business thought Clark was more concerned with local music companies then national desires. Philadelphia's record companies were frequent guests. They also noted, Clark had invested in local record pressing plants and the records they manufactured were played more often on American Bandstand then those from elsewhere.

"Mr. Clark managed to keep an average of 4.1 records owned by his publishing company, manufacturing or artist management firms in the charts every week between October 1957 and November 1959 ... Mr. Clark pushed songs in which he had an interest. ... Mr. Clark manipulated these plays to the fullest advantage."
House subcommittee's investigator's report. 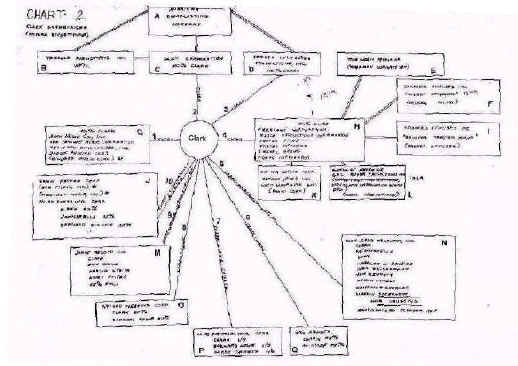 "I was making a killing, racing around trying to get all the money I could. My tentacles went in every direction. I didn’t want to let an opportunity go by.”
Dick Clark

By early 1959, Clark held stakes, either in partnership(s) or outright, in thirty-three music related businesses. When confronted by investigators at the tail end of the payola hearings in Washington, D.C., in 1960, Clark described himself as a "professional crystal ball gazer" in the somewhat hazy world of popular music. Investigators, however, were aware that Clark's "gazing" had led him to acquire a personal interest in some 29 separate companies as a result of his role as the host of American Bandstand. By November that number had increased to thirty-three.

Clark assured his boss that he had never taken money to play a record, had never refused to play a record because he wasn't given money, an and had never accepted any form of payola from anyone. Goldenson asked if had any interest in music publishing, records or anything else related to the music business

Yes he did have a part ownership in a few music-related businesses Clark defended himself by saying he didn't think he was doing anything different from others in the industry.

" I make a little bit of money, where am I going to invest? Why shouldn't invest it in the music business?"
Dick Clark

Goldenson saw it differently and told him told him sell his music interests or resign from ABC. Clark divested. Clark presented his case so well that at the end of the meeting Goldenson was convinced that Clark was innocent.

Goldenson protected him by letting him an affidavit that he modified that defined payola as agreement between him and another person to play a particular record. Learning that Tony Mammarella, Clark's Bandstand producer, had taken money from seven companies for "advice" and "over coming deficiencies" in distribution, Goldenson and Clark added a paragraph to the affidavit distancing themselves from Mammarella. Clark issued a statement saying "Early yesterday morning one of my programming associates revealed to me in certain information which he had concealed from me. I had no previous knowledge or suspicion of these facts. his resignation has been accepted."

On Tuesday November 17, 1959 a statement was issued that Clark would be getting rid of some record manufacturing an publishing companies. 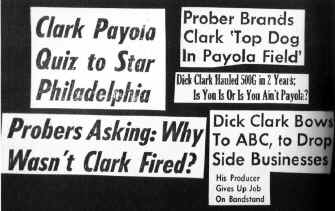 In 1959 a US Senate subcommittee began investigating payola within the music business.Clark along with Alan Freed were of particular interest to the committee. Investigators found that Clark had partial copyrights to one hundred and fifty songs, many of them were played on his show. Also, there were ties to thirty three music related businesses, including publishers, recording companies, and pressing plants, most being located in Philadelphia.

Clark admitted to accepting a fur stole and expensive jewelry from a Dore Records company president Lew Bedell. He was admonished for only this single transgression, despite the fact that songs and artists that he held considerable financial interests were frequently feature on American Bandstand.

When confronted by investigators at the tail end of the payola hearings in Washington, D.C., in 1960, Clark described himself as a professional crystal ball gazer" in the somewhat hazy world of popular music. Investigators, however, were aware that Clark's "gazing" had led him to acquire a personal interest in some 29 separate companies as a result of his role as the host of American Bandstand.

'You are an attractive and successful young man" who "took advantage of an unique opportunity to control too many elements in the popular music field."
Oren Harris subcommittee chairman

At the end of the investigation the Senators could find nothing illegal. In mid October, 1959 ABC-TV told Clark to give up these outside businesses or leave the network. Clark sold those interests. Clark emerged  with from the hearings with his reputation entirely intact.

"Clark charmed everyone. I don't believe they were ever able to pin on Dick Clark any payola, so to speak.  He made enough money by establishing the companies-he didn't have to take from the wrong guys ... He was nobody's fool.'
Subcommittee's secretary Elizabeth Paola 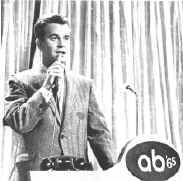 Clark moved his headquarters to Los Angeles in the 1960s. In 1965 he produced "Where The Action Is" for ABC-TV. Hosted by Paul Revere and the Raiders it was a "Bandstand" type show. Clark continued to host American Bandstand after it left ABC-TV and went into syndication. When he quit hosting in 1989 it had become the longest running television variety show of all time.

In 1973, Clark produced the American Music Awards Show. The show was to offset what younger music executives felt of the Grammy awards toward "adult contemporary music" Clark also became host for "$10, 000 Pyramid" and "TV's Bloopers and Practical Jokes"

Shares of Dick Clark Productions began trading in 1987. In 1990s he produced made for TV films as well as theatrical movies

Clarks personal taste in music was set in the 40s. This can be seen in American Bandstand theme he choose "Bandstand Boogie" by Les Elgant's Orchestra. The Dick Clark Show shifted away from rockers and by 1959 "Pop" performers were appearing frequently

"I'm absolutely pure, unadulterated whore. I will do anything for a buck."
Dick Clark - New York Journal American February 2, 1977

Clark tried to get a feel for the music he played, genuinely liked the teenagers and performers as individuals. However, Clark said that the sole reason for his relationship with rock and roll was for the money. Asked what his main contribution was Clark replied that he was proud to present more artists on television then anyone else. However, Clark had a large share of the responsibility for changing rock and roll from a vital energized music in 1956 into the homogenized 'teen pop' in 1959

Clark suffered a serious stroke in December 2004, but returned to the New Year's Eve show the next year where he remained until his death in April, 2012.

Dick Clark was a corporate creation, the model organization man whose business sense led him to explore opportunities