Buddy Holly and the Crickets 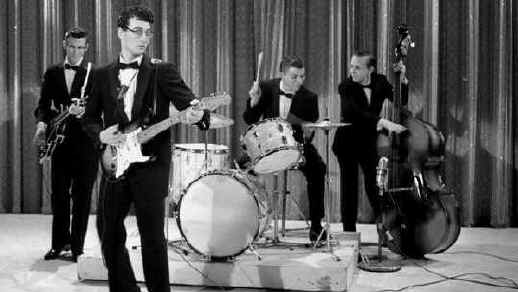 One of the two great singer-songwriter guitarists of the'50s ( the other being Chuck Berry), Buddy Holly was probably the first rock and roll artist to concern himself with virtually every aspect of his music including arranging and record production.

Charles Hardin (Buddy) Holly was born September 7, 1936 in Lubbock, Texas the fourth of four children born to Lawrence and Ella Holly. In Texas most everyone had a nickname, and the family always called him "Buddy." The Holly's had a rich musical tradition. Older brothers, Larry and Travis, taught themselves how to play the guitar. Their sister Pat sang duets with her mother in the evening at the living room piano. Every Sunday found the Hollys attending services at the Baptist Church, singing hymns of praise and joy to God.

Lubbock "The City of Churches," was conservative and segregated. In his youth, Holly had little direct contact with blacks or their music, but like so many other young musicians, he was attracted to the rhythm and blues heard on distant radio stations.

At age eleven Buddy began taking piano lessons, but soon switched to the steel guitar After 20 lessons he switched to acoustic guitar. Although his formal music education was short, Buddy was familiar with many kinds of music. Thoroughly imbued with the blues and country sounds he heard on the radio at a early age, Buddy won five dollars at age five singing "Down the River of Memories" at age five. 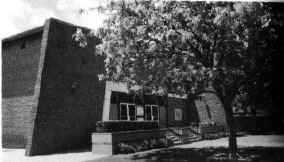 In 1951 Buddy met Bob Montgomery, a fellow seventh-grader at Hutchinson Jr. High, who also played guitar and sang country songs. Montgomery's taste in music ran to country music, especially Hank Williams, and Montgomery would be a major influence over Buddy's choice of music. 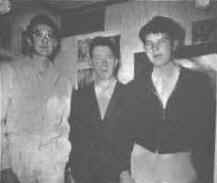 Buddy and Bob circa 1954
From left to right - Buddy Holly, Larry Welborn and Bob Montgomery

Billing themselves as "Buddy and Bob," they played junior high assemblies and local radio shows. Their sets were basically country, beefed up by harmonies and their own guitar accompaniment. Buddy and Bob became Lubbock's leading performers. They soon added Larry Welborn to play bass.

In the early fifties with high school friends he played in a country oriented Western and Bop Band. Between 1950 and 1952, they performed at local clubs and high school talent shows, sometimes adding a bass and, less frequently, drums. Harmony duets still predominated their style, with Bob usually singing lead. When Buddy occasionally would sing lead, you'd hear a more upbeat tempo, a less country sound and another forecast of things to come.

By the time Buddy and Bob entered high school, they were widening their audience by appearing at youth clubs and centers as far away as Carlsbad, New Mexico and Amarillo, Texas. Lubbock's "Cotton Club" and "Bambaloo Club," the Union Hall in Carlsbad and Amarillo's "Clover Club" all featured "Buddy and Bob" performing music they now dubbed as "Western and Bop." Local radio stations also gave impetus to Buddy and Bob's career. KDAV, the nation's first all-country radio station, held a weekly "Sunday Party," patterned after the highly successful "National Dance Barn" show on Chicago's WLS. Buddy and Bob were frequent guests. In fact, their popularity grew so much they were given their own half-hour program each Sunday. Their repertoire remained basically country with Bob Montgomery still singing lead. But as 1954 progressed, Buddy began to sing more blues and "bop" numbers on the show. Although Montgomery was the principal composer during their partnership, Buddy also began to write. Two of these three songs were "Heartbeat" and "Love's Made a Fool of You," both recorded several years later.

But it wasn't a keen-eared record company that brought Buddy his first real break. It was that good old local radio station, KDAV. In addition to airing the "Sunday Party," KDAV also sponsored live country and early rock 'n' roll concerts in Lubbock. The station often chose the "western and bop" duo to open the shows, which headlined stars like Ferlin Husky, Marty Robbins, Porter Wagoner...even Elvis. And Buddy met them all. One of these performances played a crucial role in the advancement of Buddy's career.

That October the group added Jerry Allison on the drums. October 14, 1955, Bill Haley and the Comets starred in a show at the Fair Park Auditorium with Jimmie Rodgers, Hank Snow and "Lubbock's own Buddy, Bob, and Larry." Eddie" Crandall, Marty Robbins' manager, booked the show.

The show's promoter Eddie Crandall was impressed by Buddy's performance and told Holly he would attempt to get them a recording contract. In January of 1956, Buddy was offered a contract from Decca Records. The only hitch was that they were interested in just Buddy. Montgomery insisted that Buddy go it alone,  Welborn stayed in Lubbock to finish high school.

Holly returned to Lubbock where he played locally with stars that came through the area. On June 3, 1955 Buddy and Bob opened for a young Elvis at Connelly's Pontiac Showroom, in a free show to attract customers. After that gone was the country music, replaced by pure rock and roll. 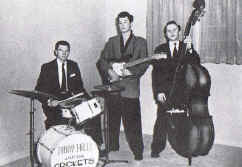 He signed a contract to record country music on the Decca label in 1956. The first session was in Nashville on January 26, 1956 and held at Owen Bradley's recording studio. Don Guess, another Lubbock boy, played bass and with Sonny Curtis on lead guitar. Drummer Allison, still in high school, sat in for only one session. Holly recorded a number of records that went nowhere. Among them was "That'll Be the Day" that in rock version would be a hit. At this time Holly began writing. One of the songs "Cindy Lou" which was to be one of his biggest hits. It would later be renamed "Peggy Sue" at the suggestion of band member Jerry Allison. Peggy Sue Gueron was Allison's girlfriend future wife.

Buddy wasn't allowed to play the guitar as Bradley thought it made the recordings to difficult. Among the four songs that were recorded was "Blue Days, Black Nights" which would be Holly's first single. On the label his name was spelled "Buddy Holly" for the first time. Reviewed favorably in the trade press, the record did not do well in the marketplace. The disc did not succeed partially because Holly and the Decca-selected backup group could not create the tightness inherent in the union of Holly's voice, his guitar and his own group of musicians. 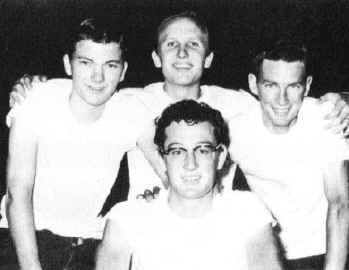 February 25, 1957 Holly and the newly named Crickets recorded the rock version of "That Will Be the Day" at Norman Petty's studio in Clovis, New Mexico. These tapes were sent to Roulette. The company liked Holly's songs but not his group. They felt they didn't need another artist like their current rock 'n' roll stars, Buddy Knox and Jimmy Bowen. They were interested in Knox recording

"That'll Be The Day," and Bowen cutting "Lookin' for Someone to Love." But Buddy Holly wanted to record his own songs with his own group, now called the Crickets.

Petty suggested sending the demos to Peer-Southern, a New York publishing house where he'd placed some of his own compositions. Peer-Southern gave the demo to Bob Thiele at Brunswick Records, a subsidiary of Decca. Thiele liked what he heard so much that Brunswick decided to use it as a master. 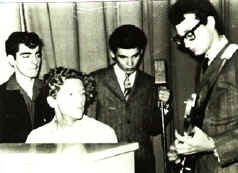 Because Decca had the original "That'll Be the Day" it was determined to be unwise to use Holly's name in the credits. Grabbing a dictionary they searched for an appropriate group name and decided to release the song as the Crickets. "That'll Be The Day," recorded by The Crickets, was released in June, 1957. Initially sales were slow but, by August they were increasing and it began to appear on the national charts. A month later "That'll Be The Day" was one of the best selling records in both the rock and roll and R&B markets.