Donald Loyd Horn was born February 20, 1916 in Pine Grove, Pennsylvania. He was the son of Loyd Pinkerton Horn, a surveyor and WW1 veteran and Annie Badman. His grandparents, aunts and uncles, of German extraction, were miners in the coal regions of Pennsylvania. His Great grandfather was a veteran of the Civil War. Most of the family never left the Pine Grove area.

Horn would change his name twice before his death in 1966. He hated the name the Donald which was given to him by his mother who died in 1933 and  he changed his name to Robert L. Horne while still in high school. He also added the "e" in high school records in about 1931.

Not much is known  about his youth other than most of his early years were spent in or near Reading, Pennsylvania. After dropping out of High School, Bob started in various jobs ending up at WRAW in Reading, Pa. finally becoming a local DJ and introducing his Air or professional name as "Bob Horn". Bob worked in and around the Reading, Pa. area for several years doing MC work at weddings and personal appearances in the area. 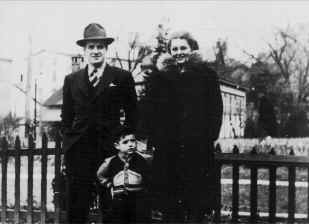 In 1935 he married his High School sweetheart, Jeanette Castor, and they had one son Peter born in 1936 and a daughter Claudia born in 1941. Bob was not happy in the local area and felt that he was not making the best use of his talents. Horn had a very baritone speaking voice with excellent phraseology, a personality that was immediately likable and an ability to fit in, in almost any situation or circumstance.

Moving to Camden, NJ in 1939 he worked in several local markets such as WIP and WPEN. Horn met and formed a working relationship with a local promoter named Nathan Segal. Together they staged many Jazz and Pop concerts most of the time using Horn as the MC and "On Air" promoter. Nat and Bob would become best friends and stayed that way until their deaths. Horn

got his first big city announcing job in Philadelphia. By age twenty four Horn was a proven announcer in a multi-million population, major metropolitan area. 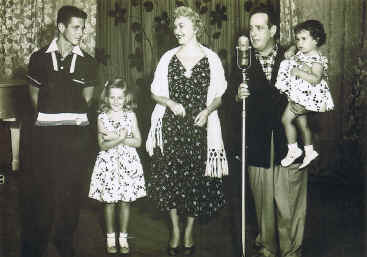 In 1946 he met Anna Davidow at the Latin Casino, a Philadelphia nightclub. Ann, a dancer with the Hacket Dance Troup, born and raised in Springfield, Mass. had recently returned from the South Pacific where she did a tour with the USO, Carl Reiner show using the stage name "Linda Stevens". Ann would later abandon dancing and make her debut as a singer at the Manor Hotel in Wildwood, N.J. Bob was growing impatient with his rise in the local markets so he accepted a job in Los Angeles as a newscaster. He and Ann moved to LA where they were married in Encenada or Rosarita, Mexico in 1946. The owner of the LA station was charged in some legal matter and Bob and Ann returned to Philadelphia in 1947 and moved into a Brownstone in South Philadelphia. Back in Philadelphia Horn went to work for WIP, where he worked as an announcer with Jim McKay and Jack Whitaker.

His late night radio show C'mon and Dance was one of the top in the Philadelphia  market. His easy soft style and knowledge of the music made him an instant success. It was now, the seed started to grow. "How to introduce records to a TV audience in an interesting and entertaining way". Horn's first try at TV was on a Game show called Laugh, Grin and Giggle, sponsored by Baloney Bubble Gum. The show was short-lived but did supply the family with all the bubble gum they could chew.

The Horns were now living back in Camden and Ann was pregnant with their first daughter Marianne. Bob continued to lay the ground work for what he considered music's debut to TV, pulling together all the known success such as the Grady and Hurst 950 club, Snaders and marketed film clips by various stars. After the birth of their daughter, Bob and the family moved to Beverly, New Jersey.

In the late 40s Horn was hired by Jack Steck, Program Manager for WFIL-Radio stations, to be a daytime announcer and late night DJ for Walter Annenbeger's Triangle Publications' WFIL-AM radio. Triangle Publications also owned  the Philadelphia Inquirer, the Daily Racing Form, other radio stations and a television station WFIL-TV. While Horn was there TV-Guide and Seventeen Magazine would be added to the Annenberg publishing and entertainment empire.

Horn was now commuting daily to Philadelphia to his new job at WFIL and his new radio show, Bob Horn's Bandstand. Bob was entering the TV market by now with a show which featured films of various stars performing and with Bob's knowledge of the subject material it flowed rather well,but still was not very successful. Horn even tried some segments with his wife Ann but she lacked his ability to ad-lib and the show soon folded. 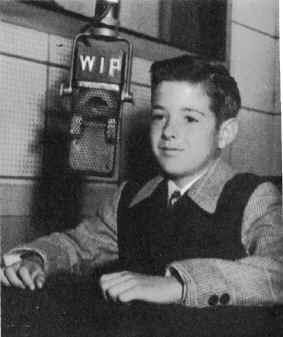 One Saturday morning over breakfast, Bob asked his son Peter,then 15,if he thought his friends would travel to Philadelphia to be on a TV show where they could dance and maybe see their favorite music stars? This would be the first shot in what would become Television history. Horn had figured it out and Bob Horn's Bandstand for TV was born. All that remained was to convince station personnel it would work. Bob took his idea to WFIL management. Immediately realizing what Bob Horn was onto the management at WFIL was very receptive since Bandstand was now the most popular radio show in Philadelphia during that time slot and bringing that name and format to TV almost guaranteed an audience. Horn always had an ability to know or sense what music kids were into and an ability to relate to teens and their wants.  Bob Horn's Bandstand premiered on October 7, 1952. It had a few growing pains as far as scheduling was concerned, but it caught on like wildfire in the Philadelphia area and later the entire metropolitan area.

Turned down by Grady and Hurst, Clipp and Koehler, gradually eliminating other station's personnel, brought them to Bob Horn who had three year record at the station as a proven audience builder announcer and disk jockey. Also by that time Horn had some TV experience under his belt.

One week before the Fall school year was to begin for Philadelphia's public and parochial schools Horn was called into George Koehler's office. At that meeting Horn was asked to moved his Bob Horn's Bandstand radio program over to television. The show was to be aired afternoons Monday through Friday. It came with some stipulations one being that Horn would have a co-host Lee Stewart. Having Stewart as a co-host would bring the show its first sponsor Mad Man Muntz who Stewart had sold television sets for.

The other being that besides whatever guests Horn could line up, only a few records were to be played interspersed with Snaders and Officials film clips, the 50s version of today's music videos. The difference between then and today was that Snaders and Officials were unimaginable and poorly produced.

Bob Horn's Bandstand began it's two week trial run the last week of September through the first week of October in the afternoon s 2:30 to 4:30. The show bombed.

It was soon decided that the videos were to be eliminated. It's not known whose idea it was, but it was decided to take from the The 950 Club's format the inviting of high school kids into the studio while they were on the air. Time was to be allocated to interview the kids - find out their names, schools they attended, hobbies, and let them dance as the music played.

For a short time the station began running old movies as it prepared for the new version of Bob Horn's Bandstand that had the teenagers dancing as Horn played his choice of records. 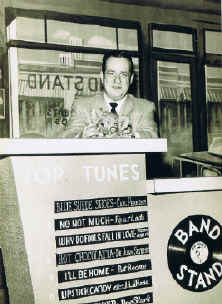 On September 28, 1952 it was decided that the new show would premier Tuesday afternoon, October 7, 1952. Despite the fact that three area high schools - West 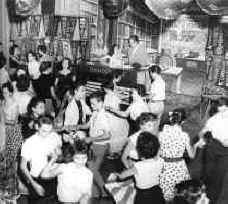 Philadelphia High, West Catholic High for Girls, and West Catholic for Boys was within walking distance of the studio the station began a heavy promotional campaign. Immediately they began hyping the show on their AM and FM radio stations and editorially in the Philadelphia Inquirer which was own by Annenberg's Triangle Publications. Press releases were sent out to every media outlet in the greater Philadelphia.

At 2:45 p.m. October 7, 1952 Bob Horn's Bandstand went on the air 15 minutes after West Catholic High School for Girls that was located just around the corner from the studio let out. However, it wasn't until 3:00 p.m. that the two first girls showed up. By 3:10 p.m there were twenty one teenagers. By the end of the third day there were a 1000 kids trying to get into a studio that could only hold 250. Horn quickly realized that the kids were the real stars of the show.