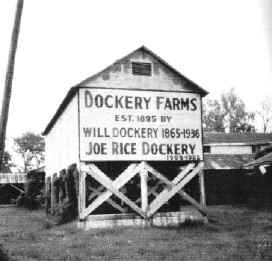 The Dockery Plantation contributed extensively to the develpment of the blues in Mississipppi. Indesputeabley, its major contribution was Charley Patton. 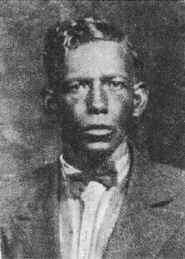 Charley Patton was quite possibily the blues' most talented all-around artist. A magnificent guitar player, songwriter and singer, he exterted influence that extended from Son House to Howlin' Wolf and Robert Johnson.

Charley Patton was elected to the Rock and Roll Hall of Fame in 2021 was an early influence.

The origins of blues is not unlike the origins of life. For many years it was recorded only by memory, and relayed only live, and in person. The Blues were born in the North Mississippi Delta following the Civil War. Influenced by African roots, field hollers, ballads, church music and rhythmic dance tunes called jump-ups evolved into a music for a singer who would engage in call-and-response with his guitar. He would sing a line, and the guitar would answer. 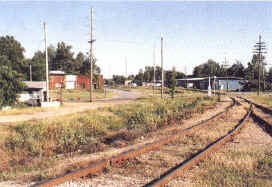 From the crossroads of Highways 61 and 49, and the platform of the Clarksdale Railway Station, the blues headed north to Beale Street in Memphis. The blues have strongly influenced almost all popular music including jazz, country, and rock and roll and continues to help shape music worldwide

The Blues... it's 12-bar, bent-note melody is the anthem of a race, bonding itself together with cries of shared self victimization. Bad luck and trouble are always present in the Blues, and always the result of others, pressing upon unfortunate and down trodden poor souls, yearning to be free from life's' troubles. Relentless rhythms repeat the chants of sorrow, and the pity of a lost soul many times over. This is the Blues.

The blues form was first popularized about 1911-14 by the black composer W.C. Handy (1873-1958). However, the poetic and musical form of the blues first crystallized around 1910 and gained popularity through the publication of Handy's "Memphis Blues" (1912) and "St. Louis Blues" (1914). Instrumental blues had been recorded as early as 1913. During the twenties, the blues became a national craze. Mamie Smith recorded the first vocal blues song, 'Crazy Blues' in 1920. The Blues influence on jazz brought it into the mainstream and made possible the records of blues singers like Bessie Smith and later, in the thirties, Billie Holiday

The Blues are the essence of the African American laborer, whose spirit is wed to these songs, reflecting his inner soul to all who will listen. Rhythm and Blues, is the cornerstone of all forms of African American music.

Many of Memphis' best Blues artists left the city at the time, when Mayor "Boss" Crump shut down Beale Street to stop the prostitution, gambling, and cocaine trades, effectively eliminating the musicians, and entertainers' jobs, as these businesses closed their doors. The Blues migrated to Chicago, where it became electrified, and Detroit.

In northern cities like Chicago and Detroit, during the later forties and early fifties, Muddy Waters, Willie Dixon, John Lee Hooker, Howlin' Wolf, and Elmore James among others, played what was basically Mississippi Delta blues, backed by bass, drums, piano and occasionally harmonica, and began scoring national hits with blues songs. At about the same time, T-Bone Walker in Houston and B.B. King in Memphis were pioneering a style of guitar playing that combined jazz technique with the blues tonality and repertoire.

Meanwhile, back in Memphis, B.B. King invented the concept of lead guitar, now standard in today's Rock bands. Bukka White (cousin to B.B. King), Leadbelly, and Son House, left Country Blues to create the sounds most of us think of today as traditional unamplified Blues.

B.B. King was inducted into the Rock and Roll Hall of Fame in 1987. 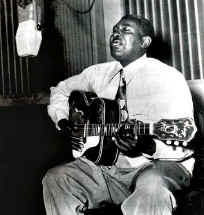 In the early nineteen-sixties, the urban bluesmen were "discovered" by young white American and European musicians. Many of these blues-based bands like the Paul Butterfield Blues Band, the Rolling Stones, the Yardbirds, John Mayall's Bluesbreakers, Cream, Canned Heat, and Fleetwood Mac, brought the blues to young white audiences, something the black blues artists had been unable to do in America except through the purloined white cross-over covers of black rhythm and blues songs. Since the sixties, rock has undergone several blues revivals. Some rock guitarists, such as Eric Clapton, Jimmy Page, Jimi Hendrix, and Eddie Van Halen have used the blues as a foundation for offshoot styles. While the originators like John Lee Hooker, Albert Collins and B.B. King--and their heirs Buddy Guy, Otis Rush, and later Eric Clapton and the late Roy Buchanan, among many others, continued to make fantastic music in the blues tradition. The latest generation of blues players like Robert Cray and the late Stevie Ray Vaughan, among others, as well as gracing the blues tradition with their incredible technicality, have drawn a new generation listeners to the blues.