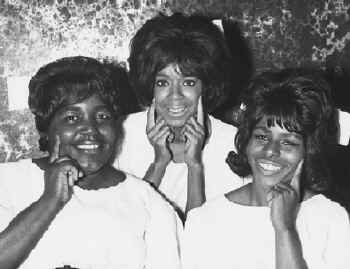 The Andantes were a driving force in creating the Motown's "The Sound of Young America." Providing enhancing vocals for many Motown records (mostly unaccredited) the Andantes played an important part in the success of Motown Records.

The Andantes consisting of Jackie Hicks, Marlene Barrow and Louvain Demps provided flawless, but largely unaccredited studio backing on countless Motown hits. The group acquired its name while Hicks and Barrow were singing with Emily Phillips, at Hartford Baptist Church in Detroit. It was their piano accompanist Mildred Dobey that gave the girls that name telling them it meant soft and sweet.

Like any new business, cash flow problems plagued Motown, Raynoma Liles along with future husband Berry Gordy, developed the Rayber Music Writing Company.   Rayber was formed in order to help young Detroit performers to find outlet for their songs prior to Motown. They advertised on a local radio station and caught the ear of their first paying client, Louvain Demps in 1959.

Marlene and Jackie attended Northwestern High School with pianist Richard Wylie who brought the Andantes to Motown in 1960. Wylie had already landed an audition and wanted the girls to be his backing group. Things didn't work out for Wylie, but the girls were invited to stay. Emily got married and her husband didn't want her to sing so she left. It was at this time that Louvain Demps was invited to join the Andantes who historians say appeared on more than 20, 000 recording sessions. At first they took a back seat to the Rayber Singers who consisted of Raynoma, Berry, Robert Bateman, Brian Holland, and anyone else hanging around. When running Motown escalated, Louvain took Miss Ray's place in the Rayber Singers who disbanded around 1962 when the Temptations, and the Supremes started doing sessions. Early Andante assignments included Eddie Holland's Jamie and Mary Well's "Laughing Boy."

Over the next few years the were on numerous Motown recording. An example of their work were the opening chords to the Four Tops "Ask the Lonely." The Andantes would have welcomed a career of their own, but there was only one single "Like A Nightmare" released with the Andante name while they were at Motown. Even on that Motown brought in Ann Bogan to sing lead. Though the single had much potential Motown didn't promote it because the group did not make live appearances. Their smooth, quality, chorale sound was so valuable that Motown never gave them a chance to record on their own. Though not allowed to record for any other company Hicks and Barrow can be heard on some of Jackie Wilson's hits including "Higher and Higher."

In 1966 when Florence Ballard of the Supremes became more and more unreliable often missing performances Marlene Barrow was used as a substitute. Starting in 1967 the Andantes were used on all the Supremes, replacing Mary Wilson and Cindy Birdsong.

The Andantes continued doing their background work on Marvin Gaye's "I Heard It Through the Grapevine."  The Andantes were used to smooth the Marvelettes' infectious, but shaky harmony, they also used them on the Four Tops for high end and  backed Martha Reeves on every Martha & the Vandellas' recording after Annette Beard left.

As the 60s ended work for the group began to end. When Motown made its move to Los Angeles in 1972 the Andantes were left in Detroit.

With less work now, Louvain receded a contract offer from ABC-Dunhill Records which ultimately fell through. She then received an offer of work in Atlanta, Georgia and the Andantes disbanded.

In the 70s Demps recorded for GRC Records, later joined the Richard Law Singers and recorded the soundtrack for the movie Black Scarlet in 1974. She also recorded jingles for local news and the show Look Up Atlanta. Besides  singing, Demps is employed as a governess and became an evangelist.  Louvain's brother, Larry "Squirrel" Demps sang with the Dramatics.

Hicks and Barrow eventually gave up singing. Marlene settled down to raise a family in Detroit. Jackie lives in Detroit too. Both are fundraisers for the Motown Museum.  The Andantes also record for Ian Levines's Nightmare Records  The tracks include a remake of the Fascinations' "Girls Are Out To Get You," as well as "Two Sides To Love," "Hurricane," "Lightening Never Strikes Twice," and a new "Like A Nightmare."